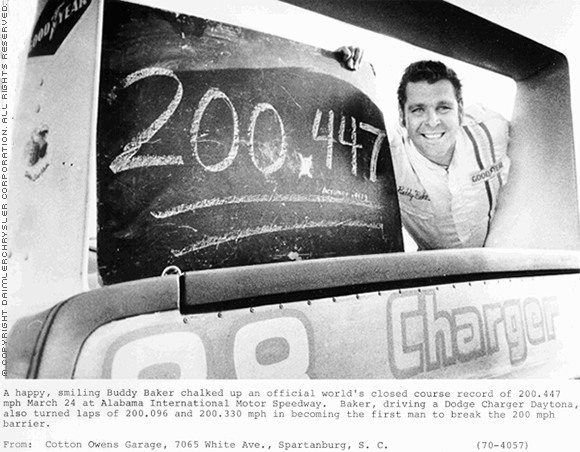 From the book "Flat Out and Half Turned Over - Tales From Pit Road with Buddy Baker" - Chapter 12, "The 200 mph Man": "Dodge picked me to run the first official 200 mph lap at Talladega. We had all run 200 mph before, but not officially. When they did pick me to be the one, there was a lot of bellyaching from the rest of the guys driving Dodges. We got a lot of press. It wasn't a big deal for me back then, but it became a big part of my life."

TALLADEGA, Ala. -- There's a magic barrier in all sports: the 4 minute mile in track, the 60 home runs in baseball, and the 200 mile lap in auto racing.

In 1954 Roger Bannister broke the record for the mile by turning in a 3 minute 59.4 record run. Since then 6 other people have cracked that magic barrier, but the name of Bannister still stands in the record books as the man who did it first. 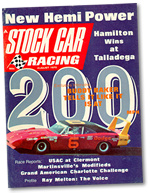 In 1961 Roger Maris hit 61 home runs eclipsing the record of 60 homers established by Babe Ruth in 1927. Maris now holds the record, but oldsters will always remind us that Babe Ruth got his runs in fewer games.

In auto racing, as in track, the distance and challenge never change. The qualifying record at Indianapolis is 171.953 miles per hour for the sleek, specially-built championship race cars.

But the magic goal has always been to run a 200 mph lap on a closed course. Drivers have been tantalizingly close. Last year Charlie Glotzbach moved the record up to 199.446 in a qualifying run at the then new Alabama International Motor Speedway in Talladega, Alabama.

Charlie's car was the new Dodge Charger Daytona, probably the most aerodynamic stock car ever built. It featured a low, pointed nose and had a high safety stabilizer mounted on the rear.

It was quickly nicknamed "the winged thing".....and when Charlie won the pole, it became "the good winged thing". The stage was set. This is where the magic barrier would probably be broken. The 2.66 mile tri-oval track with its 33-degree banking showed promise of a great future.

On March 24th Buddy Baker was at Talladega for a series of engineering tests on transmission durability. He drove test car #88, and it seemed possible that this all-out driver might break the 200 mile barrier. If he did he'd make history, but that history would always be subject to question unless the timing was official.

The rain out of the Atlanta race forced postponement of three other NASCAR Grand National races this week, and the officials were available. Chief NASCAR Timer and Scorer Joe Epton brought his timing equipment to Talladega....just in case.

The odds weren't good. Like the song says: "When it's a rainy night in Georgia, it seems like it's raining all over the world". Last week more than 10 inches of rain fell on Alabama. On Monday it rained some more. On Tuesday morning there was another thunderstorm. The track was not only wet, but any rubber which had been embedded in the track was washed away. A washed down track is traditionally slower.

But the skies cleared, the sun came out and patches in the track started drying out. But it took a full dry track for tests such as these. Noontime came and went, and by mid afternoon the track looked fit. Epton and his observers and the clocks were in position.

First runs were good for testing, but looked bad on the clocks. The speeds started at 194 and then moved up to 198.5 as Baker "looked for the groove" and the pit crew kept adjusting to get the right chassis set-up.

Buddy Baker, 29, the 6'5" son of one of stock cars most colorful drivers, was ready and relaxed. He'd shot skeet the afternoon before and expected to go fishing later in the day. He loves the outdoors and this was a holiday.

On the 30th lap, Joe Epton let out a whoop. The time was 47.857 and the speed was 200.096. Buddy and his Dodge Charger Daytona had done it. The barrier was broken and they flagged Buddy in to tell him the good news. His name would now go into the world record books as the first driver to break the magic 200 mile per hour lap barrier.

The crew, the engineers, officials and Goodyear Tire crew went wild. History had been made, and they were all part of the scene. A stock car racer -- their kind of racer -- had done it.

But after a few minutes of celebration, things returned to normal.

The engineers took over. The test was to go on. Buddy said: "you better keep watching, maybe I'll do it again."

Engineer Larry Rathgeb reminded Buddy that he was here for a test, not a race. "Just get out there and give us some good, hard steady laps and forget about racing. You've already got your record, so now help me get my test done. Then we'll all go fishing."

Buddy climbed back into the car and started methodically circling the track in "his groove". Joe Epton and his crew of observers kept watching the clocks. It was obvious that Baker was still deadly serious about running hard on every lap.

Not only had the 200 mile mark been broken, but Buddy had bettered on three separate occasions. Now he settled down and ran steadily. That was his job. Today he was a test driver, not a racer. 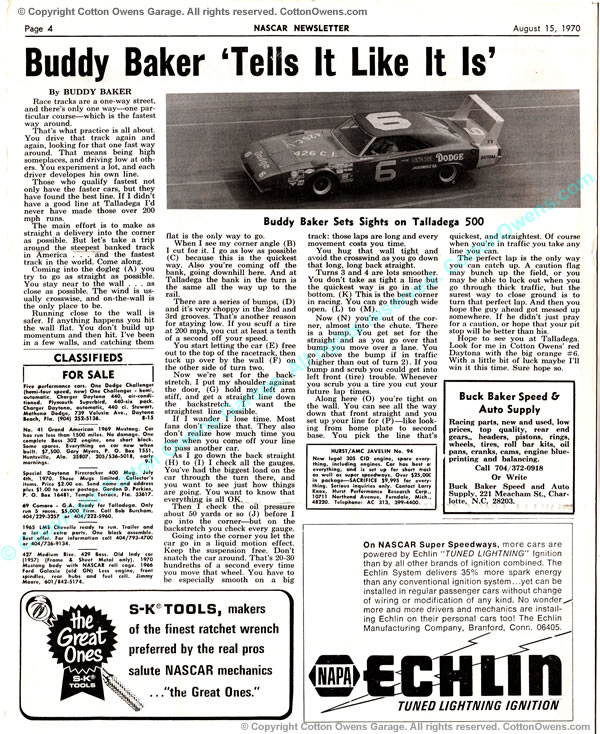 BRISTOL, Tenn. (March 21, 2001 3:08 p.m. EST http://www.sportserver.com) - Buddy Baker set a lot of records during his time as an active stock-car driver. He expects most of them will eventually be broken. This weekend, however, he'll observe the 31st anniversary of one record that can't be surpassed.

Baker always will be the first person officially timed completing a closed-course lap at more than 200 miles per hour.

The record-setting event took place on March 24, 1970, when a Dodge Charger Daytona with Baker at the wheel circled Talladega Superspeedway in Alabama at 200.447 mph. The publicity-grabbing stunt was the brainchild of a predecessor at Dodge Motorsports Public Relations, Frank Wylie.

There have been conflicting reports over the years about the real purpose of the trip. Some reports have the group going to Talladega to break the speed record, while others say they were there to test transmissions. The engineer in charge of developing Dodge race cars at the time makes no bones about it.

"Frank Wylie, the PR manager for Dodge Motorsports at the time, asked us to do it. "Wylie contacted NASCAR. They were looking for something to promote the track at Talladega. I was in Atlanta for the spring race and drove over to Alabama with Buddy Baker. The car was in Huntsville at the time. The whole project cost us about $4000 - food, transportation, getting the car there, everything."

Rathgeb said the only thing his group did to the car was analyze the aerodynamics a little more "and ran the car absolutely flat.

"Normally, we ran the car with a slight rake, the front being down a little bit. With the car perfectly flat, we found that we got zero front-end lift."

Zero lift in the front, combined with downforce from the wing at the back, helped the car turn through the corners at Talladega. It took nearly three-dozen laps to fine-tune the car, but Rathgeb, Baker and Wylie eventually reached their objective - turning several laps that day at speeds over 200 mph.

"For us, it was just another day at the office," Rathgeb said. "We were damn happy we did it, but it didn't seem like a big deal at the time. We had qualified close to 200 mph, so we thought we could break the record."

Baker still remembers the day fondly. It is clearly one of the crown jewels in his career, and he said people still comment about it to him today.

Baker said the car was very stable during the runs at Talladega.

"That was one of the great things about the winged cars," Baker said. "If you got a little sideways, it would straighten itself out.

Not long after that, the official scorer flew in from NASCAR and set up his timing lights. Baker would go out and do five lap runs - one to warm up, one to cool down and the other three for time.

Baker also has fond memories of the engineering group from Dodge.

"They were the best," he said. "They were 20 years ahead of their time in developing the winged cars. The engineering group at Dodge could build a motor as well as anyone."

Ironically, the Dodge that broke the 200-mph barrier was not built for the race track. It was an Engineering Department "mule." The term mule was used for test cars built and maintained by engineering. Not accustomed to the roar of the crowd, mules were more comfortable at test sessions and on company proving grounds.

The No. 88 Dodge Charger Daytona mule had a storied beginning. It had started life as a Public Relations Department "loaner," which was made available to journalists needing a test-drive car. It had been stolen one night while on loan to a journalist in California. It was stripped and left abandoned on four milk crates. The Engineering Department brought the car back to Michigan and rebuilt it for use as a test car.

After making its mark in the history books, the No. 88 Dodge Charger Daytona now has a place of honor at the International Motorsports Hall of Fame and Museum at Talladega.

On a recent trip to Talladega, Baker crawled into his old winged mule for a little nostalgia trip. He commented at the time that he could still outrun anything on the track with that car today.