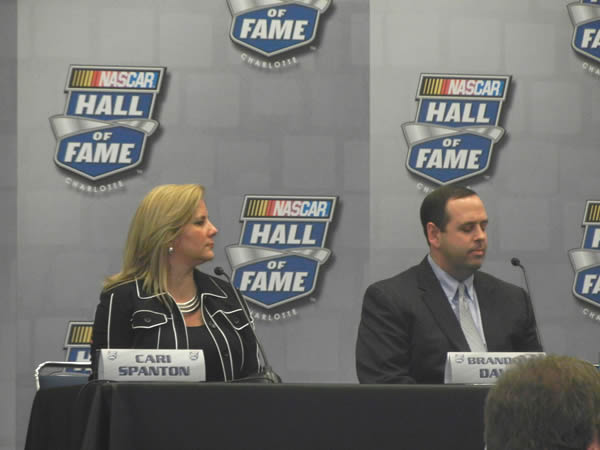 KERRY THARP:  We have the grandchildren of Cotton Owens, Brandon Davis and Cari Spanton.  Congratulations to you and your family for Cotton getting in, and certainly he's looking down tonight, I think probably, with a pretty good grin on his face. Certainly the contributions he made to the sport touched many, many lives of those that went on and had success in the sport.  I'll ask Cari first, what does it mean to you to know that your granddad is recognized as one of the best in the business?

CARI SPANTON:  Well, to my whole family it just means the world because this is-- everything that he's done his entire career, his entire life, this is a culmination of everything.  This is kind of the-- this is the icing on the cake.  This is what wraps up his career, and what we're excited about is that even though he's gone and some of these other pioneers and legends are gone, they'll be remembered here in the Hall of Fame.

KERRY THARP:  And Brandon, your thoughts about that, as well?


BRANDON DAVIS:  I don't know that I have much to add.  You know, he knew he was in two weeks before his death.  It was the last time he smiled, and we take a lot of comfort in that.  I think he realized a life of fulfillment at that point.

Q.  Was Cotton aware of what was going on here and how close it might have been and all that?

BRANDON DAVIS:  You know, obviously he was a member of the voting panel.  He'd been part of the Hall of Fame since its inception in that manner, and really enjoyed coming up here, and although he'd tell you he didn't care that much about it, I know he did.  His health had faded to the point where I'm not completely sure how-- I don't think he really-- it would have made that much of a difference at the end, but I can tell you how much it meant to us to be able to share that with him even though it was as he was fading.

Q.  Brandon, you guys ran dirt cars with Cotton. What was that like do you think from his perspective?  I know going to some of these dirt tracks, running against some of the folks who showed up every week, they had to look at Cotton Owens and say how can I beat this guy with all the experience and all he had?  What do you think it was like for him, or maybe he shared this with you, to be at those dirt tracks and racing with you guys?

BRANDON DAVIS:  Well, we were able to race for about 15 years, beginning in 1988 or '89, and I know personally, and he'll tell you, that that was some of the best years of his life.  He was as proud of one of our victories as he was his 1970 win with Buddy Baker at the Southern 500 and took it just as serious. When we went into the racetrack there was a target on our backs because of him, and he knew that, and that made it difficult sometimes. But he-- life or death to us for the $300 and a plastic trophy on Saturday nights, and this man who had been in victory lane and now in the Hall of Fame, he was as happy inside a dirt bullring as he was anywhere else.

Q.  What does it mean to you guys as much as Pearson and Bud Moore really lobbied on your father's behalf?

CARI SPANTON:  They've been great friends for years.  David talked about it, I think once he quit driving for my granddad, kind of thought maybe they'd go their separate ways, but they were always together.  They've been best friends for years.  The three of them had lunch together every day.  Everybody always knew where they were going to be.  And just to have them to continue to support us and be such big supporters is always-- we've always known that they've been there for us.

You know, they tried to get the Hall of Fame in Spartanburg, and the three of them were-- they were the biggest ones trying to get in Spartanburg.  But once it was here, they continued to work together with the Hall of Fame and do the inductions, be on the voting committee and stuff, and Bud and David have been great supporters of our whole family.

BRANDON DAVIS:  It's pretty telling that three of the first 20 members are from Spartanburg, South Carolina.  It was the hub city of racing back in that day.  My grandfather had 13 -- of NASCAR's 50 greatest drivers, 13 of those drove for him, and then my grandfather was one of those 50.  But he always mentioned three.  One was Herb Thomas; one was Dale Earnhardt, although he observed him, notinteracted with him.  And the one, to this day, greatest driver he ever saw was David Pearson.

Q.  When did you all realize just how big a deal your grandfather was?

CARI SPANTON:  I remember because I'm a little bit older than my brother and my cousins.  Mine was because every time I'd go somewhere, somebody would know who he was, and I could never do anything wrong because everybody knew my granddad was Cotton Owens. I guess going to some of the races in the beginning when I was younger and going when we'd be in the infield, he was big to NASCAR and he was big to the fans and stuff, but to us he was Papa or Pop.  He was an extremely humble person, so as big as he was to everybody else on the outside, he was always our granddad that always made time for us and always wanted to do stuff with us and show us things.

I remember working in his race car shop.  I think I got like $10 a week just to answer the phone.  He was extremely humble and always wanted his family around him.  So we knew how big he was, but to us he was much bigger than NASCAR.

BRANDON DAVIS:  Both, and I'll tell you, he was not-- as humble as he was, the only driver he thought that might have been better than Pearson was himself.  He had an unfortunate injury that shortened his racing career, but I think that's what makes him.  His stats are not that robust compared to other members of this hall, but when you look at the body of work that he did as driver and owner, that's what sets him apart.  Again, there aren't too many people, Lee Petty, Junior Johnson, and certainly perhaps some of the guys still owning teams today, but he did it all, and that's what he prided himself on.

BRANDON DAVIS:  Yeah, I think Spartanburg had the potential to be the host city for what is now Talladega, and the city fathers turned it down because Spartanburg was so hot back in those days, and if that had happened who knows what the landscape would have looked like.  I don't know if we'd be sitting in Charlotte tonight, we might be sitting in Spartanburg.  But those three and many others, including Rex White, Dick Brooks, so many other drivers and owners from Spartanburg put it on the map.

BRANDON DAVIS:  My grandfather's relationship with David and Bud, it's a blue collar town and they're blue collar folks.  They're heroes in Spartanburg and sons of Spartanburg, so it's always-- it's a big deal for our little city to be represented so well here in the big town of Charlotte.

Q.  You mentioned that an early injury cut Cotton's driving career a little short, and he came up at a time when safety wasn't necessarily a big focus for the people, yet that was really big to him.  Did that injury kind of urge him on to be more focused on safety than some of the other builders were?

BRANDON DAVIS:  I think it did without a doubt.  I mean, look at some of the footage they showed tonight on the beach.  The cars are whizzing right by the people there.  They started 150 cars three wide.  Can you imagine that today?  Talk about an exciting first lap.

His own personal experience in the car helped with the safety innovations that he created.  I don't think he personally ever-- I may be wrong about this, I don't think he personally ever had anyone die in his car, but Billy Wade who drove for him died driving a Bud Moore car.  He talked about those things a lot, and it meant a lot to him that safety was always his number one priority.

KERRY THARP:  Congratulations, Brandon and Cari, for your grandfather going into the NASCAR Hall of Fame.  We appreciate you guys being here tonight.  I want you to just know how much NASCAR appreciates your grandfather and all y'all have done for the sport of NASCAR.