Buddy Baker fails to "take it easy" while leading at College Station, Texas. 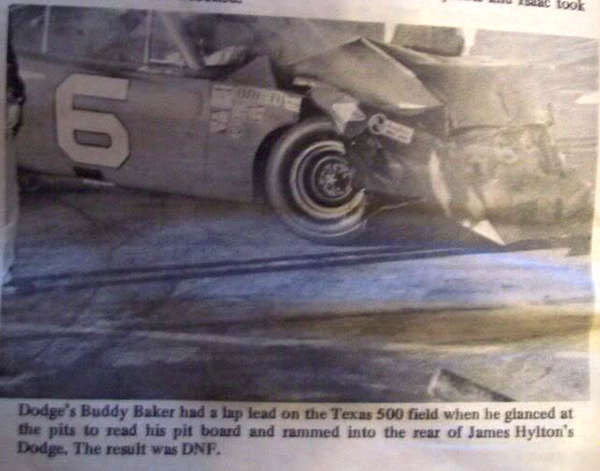 I'll give you a piece of good advice, never stand on the other side of a volley ball net from Buddy Baker. I did one time on the beach at Daytona. I must say though I thought I looked real good dressed in a volley ball net.

Gentle Giant, my foot, and Teddy Bear, you bet, grizzly bear. A volley ball game on the beach or in race in a bullring or Daytona Speedway, Buddy Baker only knew one way and that was door handle to door handle, belly to the ground and flat out. If you saw Buddy in your mirror, get the hell out of the road.

His love of speed won him some races, and very likely caused him to lose many more. On the super speedways if the car didn't break Buddy was probably going to win.

After the Talladega fiasco in '69 Goodyear knew it was going to take a new tire to stand the speed, and the 36 degree banking, and the tire would have to be tested. Now if you had to test a totally new race tire, at speeds over 190 mph, you would need a driver who liked to go fast, real fast, and was braver than Dick Tracy --- hey someone give Buddy Baker a call.

In March of 1970, Goodyear, Cotton Owens, Cotton's high-wing Dodge Daytona and Buddy showed up at Talladega with what was hoped the strongest race tire ever built.

Buddy cruised around a few laps. Getting the Dodge warmed up, and then cranked on a few hot laps. Chuck Blanchard, Goodyear's stock car field manager, and Cotton checked their stop watches and then blinked and stared at one another.

Buddy cruised in so the engineers could check the tires and take a quick look at the Dodge. Blanchard went to get Joe Epton, NASCAR's timing and scoring official.

Chuck asked Epton to set up his timing equipment because he thought there was going to be some history made in just a few minutes.

Joe got equipment ready and the engineers finished their tire checks and the Gentle Giant, ha, climbed back into the winged wonder and screamed out of the pits.

Two hundred miles per hour was no longer a barrier on a closed course. A.J. Foyt had run 200.4 in 1964 in an A.J. Watson roadster but this was on Goodyear's five mile test track in San Angelo, Texas, Buddy's laps were the first ever on a race track.

But just to deflate Baker's ego a wee bit, let's switch the scene to Larry Lopatin's two-mile, high banked oval at College Station, Texas. We find our hero leading the 500 mile Grand National race, which is running under caution.

Pit stops have been made and the cars are lined up behind the pace car leisurely circling the track with Buddy, leading the race but following closely behind James Hylton behind the pace car, Cotton is busy flashing Buddy a pit board every time by.

But the message was to big for one pit board so Cotton wrote on two boards and showed both to Buddy at the same time. This was to much for poor Buddy, he had to do a double take.

Well anyhow, while leading the race, which was under caution, Buddy Baker CRASHED into the back of James Hylton and busted the radiator in Cotton's wonderful Dodge. 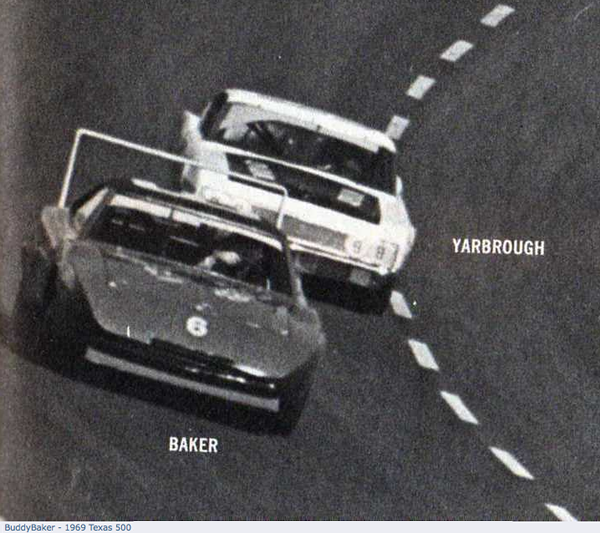 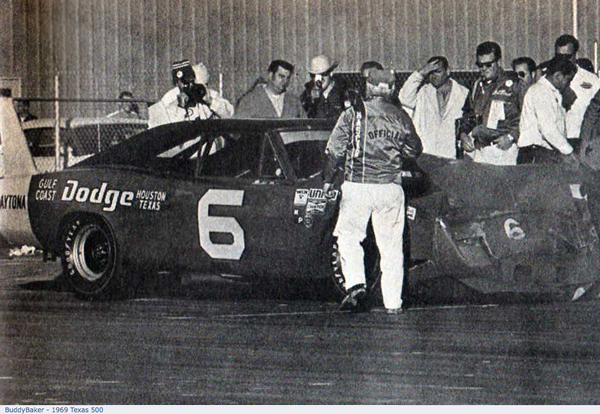 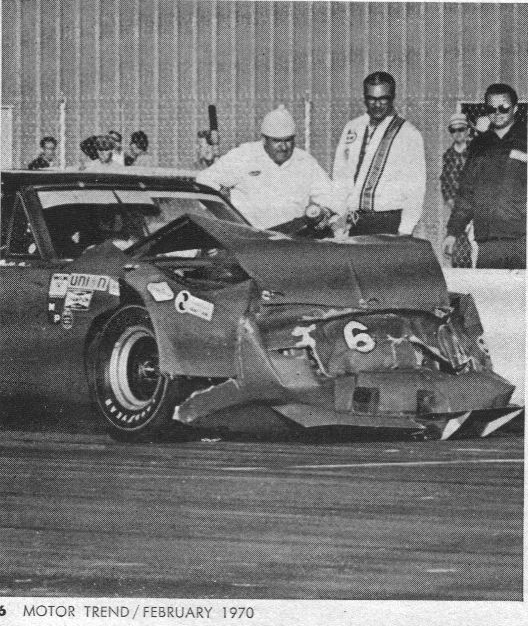 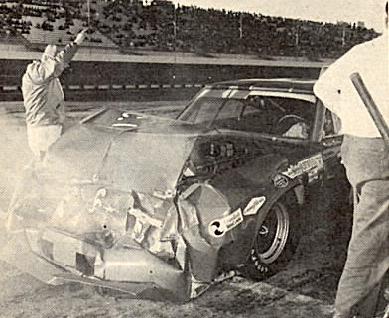